The late John Gillespie had plans for a long time to extend the Cronalaght windfarm; however, lack of grid capacity in the area had prevented this until now. Separate from the possible extension to Cronalaght windfarm, ESB Networks and Eirgrid have had very long standing plans to bring a 110kV connection to North West Donegal to strengthen the local network. Only when those plans became a reality, could the developers start planning an extension to the old windfarm. Planning was sought and obtained in 2009/10 for 5 large turbines and the new company: Gweedore Wind Farm Ltd. set up to build the new windfarm.
Gweedore Wind Farm Ltd. has a Grid Connection Agreement with ESB Networks with a MEC of 18 MW. The connection voltage is 38kV; the connection point is at Ardnagappary 110kV substation, currently under construction at Bunbeg Industrial estate. In line with normal practice, the connection will be undergrounded, partly in ductings in the public road, road numbers R258 & N56 , up minor road L5253-1 onto the windfarm access road and to the Substation at the windfarm site.

The 5 Vestas V105 – 3.45MW turbines will be manufactured by the Danish company Vestas, a world leader in wind turbine development. Turbine parts will be shipped to either Killybegs or Derry Harbour and by road transport from there to the site. It will be a logistical challenge and require cooperation and approval from many authorities, include the Garda, County Council Roads Engineer, Health and Safety experts etc. This will similarly be the case for crane arrival on site. Although there will inevitably be some disruption, every effort will be made to minimise the disruption and all of those likely to be effected will be advised well in advance. 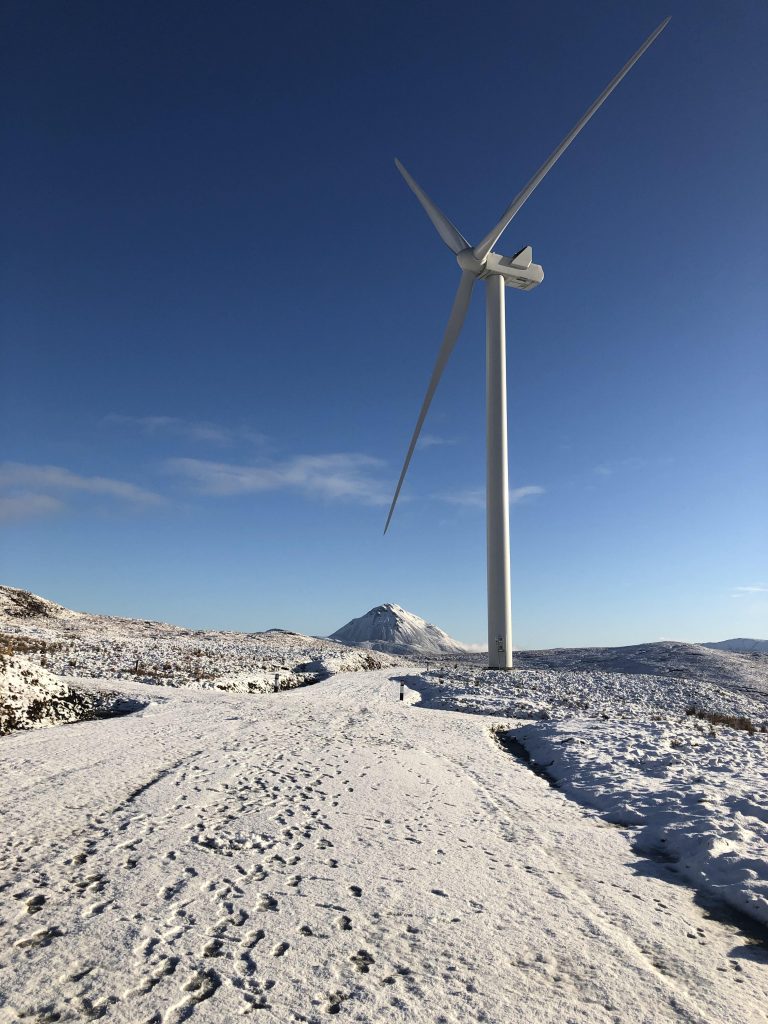 The windfarm will involve a total investment of approximately EUR28 million. Approximately 40% of this, EUR 10.4 million, will contribute to the Irish economy and, where possible, to as many local contractors as possible. The windfarm has already given substantial work to both local and County Donegal contractors and professional experts. Rates; under ongoing Country wide rates evaluation, Gweedore Wind farm can expect to pay over EUR300,000 in annual rates. With an expected lifespan of 25 years that will be a contribution of EUR7.5 million. Jobs: Local company Barr na Gaoithe will be doing the technical management of the windfarm and is expected to increase their staff numbers due to the increased demands to operate in the new wholesale electricity market, known as I-SEM.

In line with new Best Practice Guidelines adopted by IWEA ( Irish Wind Energy Association), Gweedore Wind Farm will be contributing in excess of EUR20,000 annually for local community benefit. Along with the current contribution from the old windfarm, this will represent an investment of between EUR25,000-30,000 per annum. It is envisaged that the windfarm directors will engage more directly with the local community to reach agreement on how the money should best be spent.