Construction is now well under way at Gweedore Wind Farm. Even though the best part of the summer weather was missed, the Autumn has been reasonable dry and good for carrying out civil works on such an exposed site.

The laying and testing of Cable ducts from the new Ardnagappary Substation along the public roads and up to the location of the Windfarm Substation has now been successfully completed. Gweedore Wind Farm would like to thank the public and local land owners for their understanding and patience during these works, also to the county council road engineers for their co-operation and assistance during this phase. ESB carried out regular inspections during these works to make sure that works were carried out to a high standard, which they demanded, we were also happy with the standard of work delivered by the local contractor, Hugh Harkin Plant Hire who carried out these works, when completed , all ducts were tested and approved.

Improvements to the site access roads have been completed, all internal roads and crane hard stands are well under construction . A temporary fence has been erected well below the construction site to avoid any cattle or sheep getting into danger, especially when excavating the turbine foundations.

County Tyrone company Adman have been appointed for all civil works, i.e. roads, crane areas, turbine foundations etc. We are hopping that the first foundation will be poured in early January and the concrete will be supplied by Gillespie Readymix.

Turbines parts are now due to start arriving on site May / June 2019 and then the site to become energised in July.

Since our last update in July 2019, the erection of the 5 turbines went smoothly and the windfarm was ready for energisation at the beginning of August. However, the delay in energisation of ESB 110kv Read more… 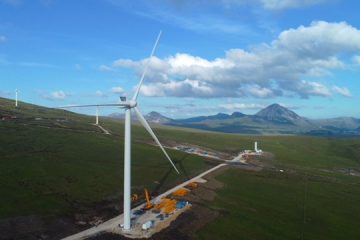 Since our last update, a lot of work has been carried out on the Gweedore wind farm project. In the first quarter of the year all five turbine foundations were poured. Three of these foundations Read more…

Work has started on the undergrounding of the ducting, which will containing the cables for connecting Gweedore Windfarm to the ESB electricity network. The landowners along the public road are aware of this work and Read more…